Starting mid-September 2020, Aardse Orchids welcomes a new management team consisting of four experienced managers. The family business has grown substantially over the past years, which has made dividing up responsibilities and disciplines more and more important. For this reason, a new, young and ambitious team has been set up, consisting of the following four members: Piet Aardse Jr (41), General Director, Wouter Konijn (41), Commercial Director, Henk-Jan Drijfhout (46), Operational Director, and Michiel de Koning (40), Financial Director.

Each member of the new management team brings considerable horticultural experience to the table, thus ensuring that Aardse Orchids is ready for the future. Piet Aardse Jr has been a director/company owner of the family business for years; he will focus on general and statutory affairs. Wouter Konijn is an experienced commercial manager with more than 15 years of expertise in greenhouse horticulture; he has been commercially involved in Aardse Orchids since 2011. Henk-Jan Drijfhout has managed his own greenhouse business for over 15 years, thus gaining considerable experience in, among other things, operational management. Michiel de Koning built up his financial expertise in a range of functions in various horticulture-related companies.

With the new management team in place, Hans Willemsen (the current General Director) will step down as of 1 October 2020. He will continue supporting Aardse Orchids in the coming years as a member of the Advisory Board.

The Aardse Orchids family business was established in the northern province of Groningen in the early 1960s . On more than 125,000 square meters of professional greenhouses, they produce over 7 million plants per year. Aardse Orchids is the partner in trade and production of Phalaenopsis orchids for retailers, discounters, importers and exporters. The change in leadership will provide Aardse Orchids with new strength, ambition and energy, thus fully preparing the company for the future!

Aardse Orchids from Zuidbroek has launched a new product line Phalaenopsis products, designed for international retailers. The products have been developed especially for ‘Halloween’, that will take place on 31. October in several countries. Nice, creative ideas, that will stimulate the consumer to buy beautiful Phalaenopsis. The ‘Halloween’ concept includes a colorful printed cardboard potcover, together with ceramic plantpots in typical ‘Halloween’ colors. Take a look at our product leaflet, or contact our sales department for more information:

On 3. July Phalaenopsis grower Aardse Orchids from Zuidbroek, the Netherlands, has joined a select group of MPS-ProductProof certified companies within the horticultural sector. This certification of Aardse Orchids is a reward for its environmental friendly cultivation of beautiful Phalaenopsis orchids with the use of fewer pesticides and with more focus on organic methods, for already many years.

Aardse Orchids has invested a lot of time and money in the development and implementation of this cultivation method, making the company one of the ‘green’ leaders within the orchids industry. Recently also many other growers within the orchid sector expressed the ambition to get the MPS Productproof certificate on short notice, which Aardse Orchids sees as a positive and necessary development.

The new certification of Aardse Orchids is a logical next step on the certificates MPS-ABC and MPS-GAP, which the company already has for years. MPS-ABC was a first step on the road to a sustainable business model. The MPS-GAP certificate has been created for companies supplying to retailers, and includes production requirements referring traceability, environment, safety and hygiene.

Having all these certificates is very important for Aardse Orchids, because most of their Phalaenopsis orchids find their way -via international retailers- to the consumers, that are asking more and more for sustainable products.

Recently Aardse Orchids received the very positive outcome of a survey, carried out by an independent institution, for the quality of its Phalaenopsis orchids, which was qualified ‘very good’!

This week Phalaenopsis grower Aardse Orchids was informed on the results of a quality check of a tray mixed coloured Phalaenopsis orchids, carried out by an independent quality control organization. The ornamental value of the leaves, the blooming flowers and the durability of the Phalaenopsis orchids were assessed. Tests were carried out simulating an unusually long transit time (7 days), a long retail shop phase (7 days) and a consumer phase of even 56 days. 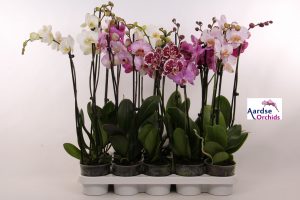 After more than 30 years of full commitment to Aardse Orchids, Theo Aardse has decided to follow other interests as of April the 1 st of this year, and to step down as board member and colleague of our company. We understand his decision and want to thank him for all his contributions and wish him every success in the future. Theo will remain involved with the company as a shareholder. Theo’s commercial responsibilities will be taken over by Wouter Konijn, commercial manager of our company, on April the 1st.